About us AESTHETIC PROSTHESIS

American Hand Prosthetics was founded with the realization that most successful hand prostheses in the future will be mechanically simple help devices of socially acceptable appearance.

Flexibility in individual design, uncompromising standards of quality and service and attention to detail other manufacturers ignore has led to AHP hand prostheses becoming the standard against which all others are judged. Yet, we once again emphasize that even AHP prostheses fall short of true replacement of missing parts.

They are designed for well-defined and specific purposes. The recognition of these purposes is essential to realistic expectations and customer satisfaction.

AHP Technology is so advanced that patents have been granted by the United States, United Kingdom, France and other major countries. Unfortunately, mass production is not possible and customized manufacture is labor intensive as demonstrated by the meticulous sculpturing in wax of this master model.

The Biochromatic coloring process mimics Nature with a translucent surface beneath which pigments are deposited according to the individual’s characteristics. Color matching is superior to any previously achieved, but a prosthesis obviously cannot adapt to the small constant skin color changes due to variation in blood flow or pigment changes such as a suntan. If you live in an area of major seasonal changes, one prosthesis for summer and another for winter is desirable.

About us AESTHETIC PROSTHESIS 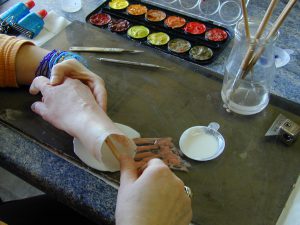 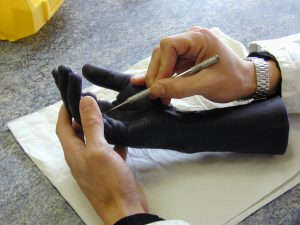